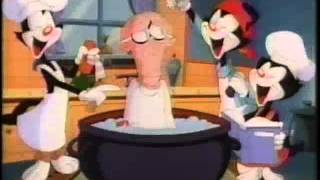 The two Warner Brothers Yakko and Wakko and their Warner sister Dot had been (supposedly) created in the 1930's, but their cartoons were too screwy for the general public to handle. The three Warners were locked up in the studio water tower until they escaped in the 90's. There, they run wild, causing chaos everywhere!

You are able to buy "Animaniacs" on Amazon Video, Apple iTunes as download.