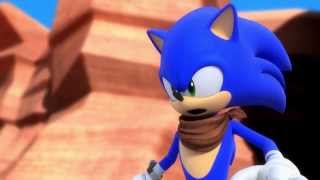 The speedy blue hedgehog gets a new look in this comedy/adventure series that sees him battling a familiar foe with sidekick Tails and pals Knuckles, Amy and Sticks. The gang tries to ward off the evil plans of Dr. Eggman, who is hellbent on taking over the world. Sonic faces regular battles with Eggman's henchmen, including loyal robots Orbot and Cubot, evil interns, and giant, robotic monsters.