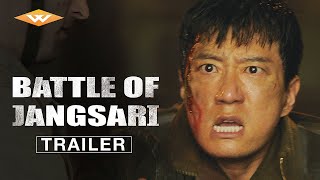 Korean War, September 1950. In order to fight the enemy forces based in the South of the peninsula, General MacArthur orders the start of the Incheon Landing Operation, deploying diversionary attacks in other locations. Without real military forces to spare, 772 very young Korean student soldiers, barely trained, are sent to Jangsari Beach, where they will face a heroic fate and discover the value of friendship. (A sequel to Operation Chromite, released in 2016.)

6.1 (1k)
Genres
Drama, Action & Adventure, War & Military
Runtime
1h 44min
Director
Kwak Kyung-taek , Kim Tae-hun
Under the new EU law on data protection, we inform you that we save your history of pages you visited on JustWatch. With that data, we may show you trailers on external social media and video platforms.