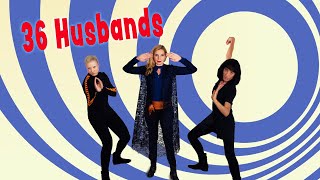 36 Husbands is a mystical, musical, Kung Fu spy comedy starring 3 powerful women - and a bunch of husbands. Krista, top spy and Kung Fu master, has extraordinary powers and she puts them in action on her quest to slow down the steady march towards World War III. Together with her Kung Fu disciples, Gina and Nola, (and Frankie, a spy on-loan from MI6) they fight and love their way across the world leaving a trail of broken hearts and sabotaged plans. All the spies and evil-doers are tuning into the Bright Blue Gorilla TV show. Why do they watch? Is it the music, is it the comedy? Maybe you can figure it out.

7.4 (1k)
Genres
Comedy
Runtime
1h 23min
Director
Michael Glover
Under the new EU law on data protection, we inform you that we save your history of pages you visited on JustWatch. With that data, we may show you trailers on external social media and video platforms.