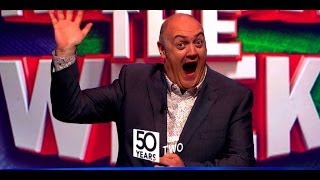 Mock the Week is a British topical celebrity panel game hosted by Dara Ó Briain. The game is influenced by improvised topical stand-up comedy, with several rounds requiring players to deliver answers on unexpected subjects on the spur of the moment.

Currently you are able to watch "Mock the Week" streaming on Sky Go, Virgin TV Go or for free with ads on UKTV Play.