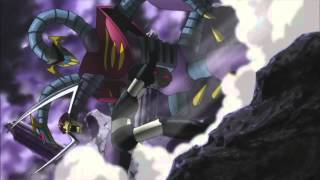 Shin Mazinger Shogeki! Z Hen, alternatively romanized Shin Mazinger Shougeki! Z Hen and romanized/translated in the Soul of Chogokin toys line as Shin Mazinger Impact Z!, is a new Mazinger anime series, directed by Yasuhiro Imagawa which premiered in Japan on April 4, 2009. According to the production staff, it has no relation to the 1970s show and should not be described as a Mazinger Z remake. The series is a "retelling" of the basic story of Mazinger Z, featuring most of the same characters, mechanical beasts, and some general plots of the original series, plus some additional material. It keeps the original plot line of Mazinger Z, but makes references to other Go Nagai works, such as Z Mazinger, Violence Jack, Mao Dante and others. Elements from other related Mazinger works appear in the series, such as the story of Kedora and the appearance of Energer Z, the original concept before Mazinger Z. Along with the TV series, a new manga, Shin Mazinger Zero started on April 18, 2009 in the magazine Champion Red. The pair responsible for the shōnen manga Akumetsu, Yoshiaki Tabata and Yuki Yogo, write and illustrate the Shin Mazinger Zero manga. In 2010 a game based on the series was released for the PC.

Currently you are able to watch "Mazinger Edition Z: The Impact!" streaming on Crunchyroll or for free with ads on Retrocrush.

7.2
Genres
Action & Adventure, Animation, Science-Fiction
Runtime
25min
TV
Under the new EU law on data protection, we inform you that we save your history of pages you visited on JustWatch. With that data, we may show you trailers on external social media and video platforms.