Fifteen years after the events of Enchanted, Giselle, Robert and Morgan move to the suburbs in Monroeville. Their happily ever after is rudely disrupted by Malvina Monroe – a woman with a wicked plan for her new neighbours. Their troubled introduction to the suburbs leads Giselle to make a wish for the perfect fairytale life. This decision quickly spirals out of control, putting everything she cares for in danger. Giselle must now save her family and protect the Kingdom of Andalasia before the stroke of midnight.

Disenchanted is an upcoming musical fantasy comedy written and directed by Adam Shankman and produced by Disney+.

Disenchanted is a direct sequel to the blockbuster Enchanted, and will explore the lives of its characters 15 years after the events of the first movie. Giselle, played by Amy Adams, was lucky enough to get her happily ever after…but her ideal life is in serious trouble when a wish she makes goes terribly wrong.

Joining Adams in the sequel are Patrick Dempsey, James Marsden, and Idina Menzel, all of whom were in the original film.

Where can I stream Disenchanted?

Disenchanted will be available for streaming worldwide on Disney+ on November 24, 2022. 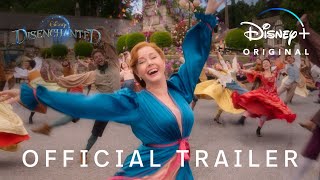 Disenchanted streaming: where to watch online?

Disenchanted will be available to stream on Disney Plus from November 24, 2022.