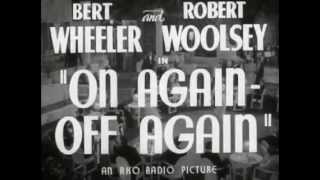 This wacky vaudeville-style romp casts the irreverent comedy team as feuding co-owners of a drug company, William “Willy” Hobbs (Wheeler) and Claude Augustus Horton (Woolsey), who agree to wrestle each other for the sole ownership of the business. The winner will take the company and the loser must become the other’s valet for a year. But when Hobbs loses, he sends his wife to Florida and schemes to trick Horton. What follows are hilarious hijinks as only Wheeler and Woolsey can pull off!

On Again-Off Again streaming: where to watch online?

6.1
Genres
Comedy
Runtime
1h 8min
Director
Edward F. Cline
Under the new EU law on data protection, we inform you that we save your history of pages you visited on JustWatch. With that data, we may show you trailers on external social media and video platforms.