The Grim Adventures of Billy and Mandy - Season 3 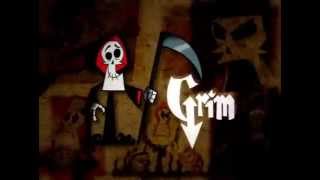 This season includes 16 regular half-hour episodes. For the most part, from this season on each episode includes only two segments, each of 11 minutes (without commercials), instead of three of 7 minutes each. In this season, new characters that are introduced are Sir Raven (Julian Stone), a humanoid raven that serves as the storyteller for some segments; Lord Pain, the fearsome warrior looking to serve his master, the Grim Reaper; Cerberus, the gigantic, three-headed, fire-breathing dog of Grim; Pinocchio, the puppet made of wood who wants to eat Billy's flesh to become a real boy; Lord Moldy Butt, a parody of the Harry Potter villain, Lord Voldemort; and Boogey Man, the Boogeyman himself and a long time adversary of Grim.Irwin's parents are also intreoduced, his father Dick, and his mother Judy, who is revealed to be a mummy.General Skarr, a character from Evil Con Carne, moves to Endsville after the Hector Con Carne's company was sold to oher company who doesn't want to have competition to plan to rule the world. Other characters that feature prominently include Billy's "son", Jeff the Spider; Billy's neglected pet fish, Little Porkchop; Billy and Mandy's school teacher, Eleanor Butterbean; Billy's cousin, Nergal Junior, and his shape-shifting powers;and his acne problems; the Chocolate Sailor, and his The stories presented are varied, including Billy helping out dwarves in their war against the elves; Billy becoming the superhero the Green Squeaker, having the power of being green, squeaking when he moves, and shooting yoghurt from his armpits; and Hoss Delgado, spectral exterminator; Odin, Thor, and other Norse gods, who battle against Billy in Valhalla; Eris and the Apple of Discord; Billy facing his phobia of clowns; Sperg,Billy stealing Mandy's "nerve", to become tough and mean;enchanted candies; the Tooth Fairy, who is an Old West cowboy; Mandy getting a new friend to replace Billy; and Billy getting rid of his "Dinobonoid" action figures.

Streaming, rent, or buy The Grim Adventures of Billy and Mandy – Season 3:

Currently you are able to watch "The Grim Adventures of Billy and Mandy - Season 3" streaming on HBO Max or buy it as download on Apple iTunes, Amazon Video.