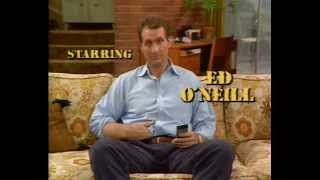 Al Bundy is an unsuccessful middle aged shoe salesman with a miserable life and an equally dysfunctional family. He hates his job, his wife is lazy, his son is dysfunctional (especially with women), and his daughter is dim-witted and promiscuous.

Currently you are able to watch "Married... with Children" streaming on CTV for free with ads or buy it as download on Apple iTunes, Microsoft Store, Google Play Movies.