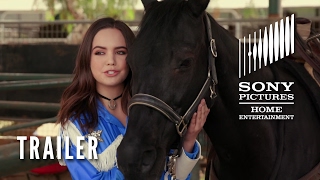 Dusty Rhodes is new at Jefferson High, and she sticks out like a... well, a cowgirl. Dusty is a real cowgirl from Texas. Her parents are in the U.S. Army: her mother a helicopter pilot and her father a Special Forces Army Ranger. At first, Dusty is an outcast, but eventually she makes friends with a group that includes Savanah, a girl whose father was killed while fighting in Iraq three years earlier. Even though Savanah is kind of Goth and Dusty is all cowgirl they have a special connection and they bond. Dusty gets the school to agree to an Equestrian Drill Team and she enlists her new city slicker friends to join the team. As Dusty and the team practice, Dusty deals with the fears that come with her mother fighting in Afghanistan.

A Cowgirl's Story streaming: where to watch online?

5.6
Genres
Kids & Family
Runtime
1h 38min
Age rating
PG
Director
Timothy Armstrong
Under the new EU law on data protection, we inform you that we save your history of pages you visited on JustWatch. With that data, we may show you trailers on external social media and video platforms.