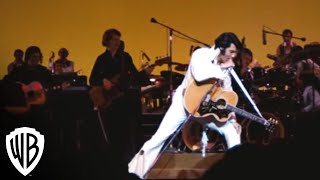 This 1970 concert documentary captures Elvis Presley midway through a fateful transition, seeking to reclaim his musical primacy after a decade of self-imposed exile from concert stages. Sidelined by his big-screen career, eclipsed by rock's mid-'60s transformations, the King had begun his return two years earlier with the relatively lean attack of his fabled network television appearance, '68 Comeback Special. Now the Memphis legend was poised to reposition his performing profile by pursuing the top rungs of headliner status in Las Vegas, a career choice that seems even more ephemeral in hindsight than it already did at the time. Elvis: That's the Way It Is follows the show's genesis from rehearsal to stage, with the performance footage that provides its inevitable climax shot over six nights. The rehearsal footage, expanded for this special edition, offers further proof that Presley's band was simply superb...

Elvis: That's the Way It Is streaming: where to watch online?

People who liked Elvis: That's the Way It Is also liked

8.0 (2k)
Genres
Music & Musical, Documentary
Runtime
1h 49min
Age rating
G
Director
Denis Sanders
Under the new EU law on data protection, we inform you that we save your history of pages you visited on JustWatch. With that data, we may show you trailers on external social media and video platforms.