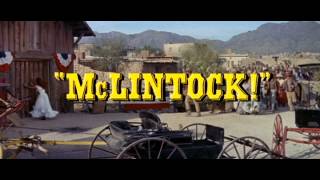 Ageing, wealthy, rancher and self-made man, George Washington McLintock is forced to deal with numerous personal and professional problems. Seemingly everyone wants a piece of his enormous farmstead, including high-ranking government men, McLintock's own sons and nearby Native Americans. As McLintock tries to juggle his various adversaries, his wife—who left him two years previously—suddenly returns. But she isn't interested in George; she wants custody of their daughter.

McLintock! streaming: where to watch online?

7.2 (13k)
Genres
Western, Comedy, Romance
Runtime
2h 7min
Director
Andrew V. McLaglen
Under the new EU law on data protection, we inform you that we save your history of pages you visited on JustWatch. With that data, we may show you trailers on external social media and video platforms.