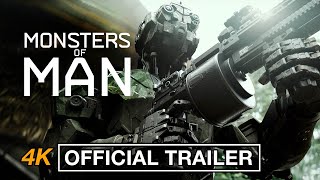 A robotics company vying to win a lucrative military contract team up with a corrupt CIA agent to conduct an illegal live field test. They deploy four weaponized prototype robots into a suspected drug manufacturing camp in the Golden Triangle, assuming they'd be killing drug runners that no one would miss. Six doctors on a humanitarian mission witness the brutal slaughter and become prime targets.

Monsters of Man streaming: where to watch online?

5.3 (3k)
Genres
Science-Fiction, Mystery & Thriller, Action & Adventure, Horror
Runtime
2h 12min
Director
Mark Toia
Under the new EU law on data protection, we inform you that we save your history of pages you visited on JustWatch. With that data, we may show you trailers on external social media and video platforms.