Tom and Darcy plan the picture perfect destination wedding. As the big day approaches, the couple brims with anxieties about saying "I do." But they move forward, surrounded by their loved ones, and plan to exchange vows in the most memorable ceremony of their lives. While the wedding is certainly one for the history books, the reason is something no one could have anticipated: the entire wedding party is taken hostage. To escape in one piece, they’ll all have to fight for their lives.

Shotgun Wedding is an action comedy film produced by Lionsgate. Jason Moore is the movie’s director and the filmmaker previously worked on the hit 2012 movie, Pitch Perfect. Moore is also a frequent director of theater productions, including productions on Broadway of Steel Magnolias and Shrek the Musical.

Where can I stream Shotgun Wedding?

Shotgun Wedding will be released on January 27, 2023 on Amazon Prime Video.

Shotgun Wedding was announced on January 29, 2019, with Jason Moore directing and Mark Hammer and Liz Meriwether writing the screenplay. In October 2020, Jennifer Lopez joined the project in the lead female role and Armie Hammer replaced Ryan Reynolds. Following sexual assault allegations, Hammer was replaced by Josh Duhamel in January 2021. In May 2021, Callie Hernandez and Steve Coulter joined the cast. Filming began in February, 2021 and wrapped in April of that year. 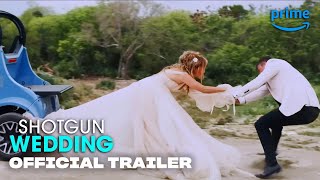 Shotgun Wedding will be available to stream on Amazon Prime Video from January 27, 2023.