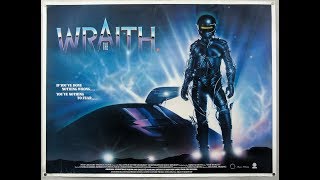 Packard Walsh and his motorized gang control and terrorize an Arizona desert town where they force drivers to drag-race so they can 'win' their vehicles. After Walsh beats the decent teenager Jamie Hankins to death after finding him with his girlfriend, a mysterious power creates Jake Kesey, an extremely cool motor-biker who has a car which is invincible. Jake befriends Jamie's girlfriend Keri Johnson, takes Jamie's sweet brother Bill under his wing and manages what Sheriff Loomis couldn't; eliminate Packard's criminal gang the hard way...

The Wraith streaming: where to watch online?

6.0 (15k)
Genres
Science-Fiction, Horror, Romance, Mystery & Thriller, Action & Adventure
Runtime
1h 33min
Age rating
R
Director
Mike Marvin
Under the new EU law on data protection, we inform you that we save your history of pages you visited on JustWatch. With that data, we may show you trailers on external social media and video platforms.