Fontaine can always tell when something isn’t right. He just doesn’t quite feel like himself anymore. Slowly, his suspicions come to light and illuminate a mystery that will see him facing a wildly racist governmental conspiracy. He’s not alone in the sinister situation, even if he wants to be. Whether he likes it or not his companions, Yo-Yo and Slick Charles, are along for the ride, giving the caper some character and style. The unlikely sleuths are set to uncover the most unnatural and unnerving experiments on African-Americans. They can’t just stand by and watch it happen, the three have to take action against these brutish schemes. The only way to end the tortuous testing is to take down the whole corrupt regime and in the process take a little revenge.

They Cloned Tyrone is an upcoming sci-fi mystery caper movie distributed by Netflix and produced by Macro Media. The film is directed by Juel Taylor in his feature-film debut. Known for his writing work on Creed II and Space Jam: A New Legacy, Taylor is also penning the script for They Cloned Tyrone alongside Tony Rettenmair. In charge of the camera and lighting crew is Ken Sang who is known for his style as a cinematographer. His previous work includes Deadpool 2, Project X, and work on Love, Death & Robots. Pierre Charles is in charge of the music for the film and reunites with Juel Taylor after the pair worked together on Space Jam: A New Legacy.

The comedy caper is led by a trio of well-respected performers. BAFTA and Golden Globe-winning John Boyega leads the cast as the fearless Fontaine, set on uncovering the mystery at the heart of the film. Oscar-winning Jamie Foxx appears as Slick Charles and the musician-cum-actor also serves as a producer on the film. Teyonnah Parris is playing Yo-Yo, the third in the marauding trio. Parris has a slew of successful roles under her belt including Chi-Raq, If Beale Street Could Talk, and Dear White People. She is also known for her role in the Marvel Cinematic Universe as Monica Rambeau. British-Canadian actor Kiefer Sutherland, iconic in his role as Jack Bauer on the hit television show 24 is another notable inclusion in the cast list. 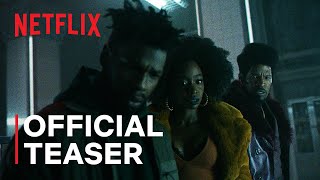 They Cloned Tyrone streaming: where to watch online?

We try to add new providers constantly but we couldn't find an offer for "They Cloned Tyrone" online. Please come back again soon to check if there's something new.