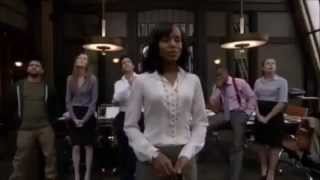 In an interview with Shonda Rhimes, she revealed that the fourth season would highlight Darby Stanchfield's character, Abby Whelan. She said "Season 4 is Abby's season. That was by design. A lot of what we know about Abby happens this season."[5] Rhimes also confirmed the speculation about the fate of the character Harrison Wright, which she confirmed was that he was killed.She said that all the people at OPA will cope in different ways to Harrison's death, Olivia the hardest. Rhimes said "It will be very devastating for Abby in a surprising way. You'll see how she's coping with it in a very different way than you would expect."[6] Olivia will deal with her betrayal to everyone she left behind, when she hears about the fate of Harrison. The betrayals changed everyone permanently, and Olivia will have to deal with it. Shonda Rhimes stated that the fourth season will focus more on the core characters, as opposed to the third season where more characters were introduced. Rhimes explained why: "Kerry Washington couldn't work 14 hours a day, so we had to tell our story in a different way, and that necessitated other people both picking up the slack in beautiful ways

Currently you are able to watch "Scandal - Season 4" streaming on Hulu or buy it as download on Apple iTunes, Google Play Movies, Vudu, Amazon Video, FandangoNOW.

7.7 (68k)
Genres
Drama, Mystery & Thriller
Runtime
43min
Age rating
TV-14
Season 4
Season 4
Under the new EU law on data protection, we inform you that we save your history of pages you visited on JustWatch. With that data, we may show you trailers on external social media and video platforms.