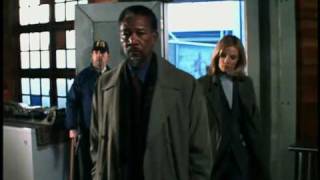 Morgan Freeman reprises his Kiss the Girls role as Alex Cross in this spellbinding psychological thriller that is 'a knockout with a surprise twist.' After the harrowing death of his partner, detective and best-selling author Alex Cross has retreated to the peace of retirement. But when a brilliant criminal (Michael Wincott) kidnaps a senator's young daughter, Alex is lured back into action. Teamed with the Secret Service agent (Monica Potter) assigned to protect the missing girl, Alex follows a serpentine trail of clues that leads him to a stunning discovery - the kidnapper wants more than just ransom...he wants Alex's help in documenting the crime of the century. With time running out, Alex plunges through a tangled web of danger and deceit to stop a madman and save an innocent victim's life.

Along Came a Spider - watch online: streaming, buy or rent

People who liked Along Came a Spider also liked