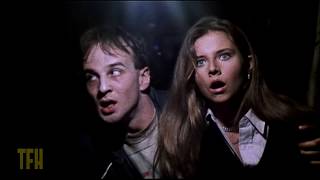 A psychic participates in a séance where she sees a vision of a Dunwich priest hanging himself in a church cemetery, causing her to die of fright. New York City reporter Peter Bell investigates the séance and learns that the priest's suicide has somehow opened a portal to Hell and must be sealed by All Saints Day, or else the dead will overtake humanity.

City of the Living Dead streaming: where to watch online?

People who liked City of the Living Dead also liked