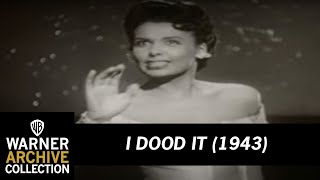 Constance Shaw, a Broadway dance star, and Joseph Rivington Reynolds, a keen fan of hers, marry after she breaks up with her fiancé. Connie thinks Joseph owns a gold mine, but he actually works as a presser at a hotel valet shop. When everyone learns what he really is, Joseph is banned from the theater. When he sneaks in again, he learns of a plot to set off a bomb in the adjoining munitions warehouse.

I Dood It streaming: where to watch online?

We try to add new providers constantly but we couldn't find an offer for "I Dood It" online. Please come back again soon to check if there's something new.

People who liked I Dood It also liked