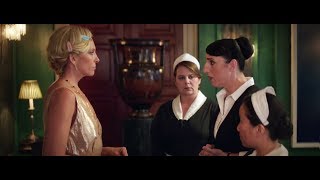 Adding a little spice to a waning marriage, Anne and Bob, a wealthy and well-connected American couple, move into a manor house in romantic Paris. While preparing a particularly luxurious dinner for sophisticated international friends, our hostess discovers there are 13 guests. Panic-stricken, Anne insists her loyal maid Maria disguise herself as a mysterious Spanish noble woman to even out the numbers. But a little too much wine and some playful chat lead Maria to accidentally endear herself to a dandy British art broker. Their budding romance will have Anne chasing her maid around Paris and finally plotting to destroy this most unexpected and joyous love affair.

Madame streaming: where to watch online?

6.1 (6k)
Genres
Comedy, Drama, Documentary, History, Romance, Made in Europe
Runtime
1h 31min
Director
Amanda Sthers
Under the new EU law on data protection, we inform you that we save your history of pages you visited on JustWatch. With that data, we may show you trailers on external social media and video platforms.