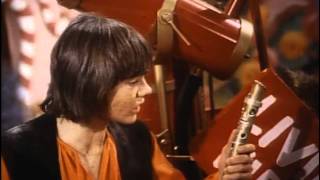 Jimmy (Jack Wild) ventures to Living Island with his magical, talking flute, Freddy. Once there, he befriends many of the island's inhabitants, but the evil Witchiepoo (Billie Hayes) is determined to steal Freddy the flute away from the boy to impress the visiting Witches' Council and win the Witch of the Year Award.

Pufnstuf streaming: where to watch online?