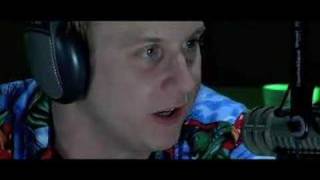 White Out is the story of Nick Watson, host of Reality, a talk show on Norwalk University's WSKO radio station in northern New Hampshire. Just as he's closing down the show on the very last episode of his college radio career, he receives a disturbing on air phone call. It seems that Michelle Fullmer, his fiancé, his wife in nineteen days in fact, is cheating on him with none other than Richie Fontaine, Norwalk's Dust Devils' star quarterback. Too much for most people to handle. Compound this all with the freak blizzard that rages outside, dumping a very healthy amount of snow on the greater Norwalk area, keeping other hosts out of the studio, and stranding Nick inside with co-host Andy Wolcienski, producer Hannah Lorenz, and a great deal of anguish and fury. It would be up to Nick to be the better person, but it seems Nick doesn't have anything nice to say about his darling ex-fiancée. That won't stop him. The next twelve hours on the radio are going to be VERY interesting.

White Out streaming: where to watch online?