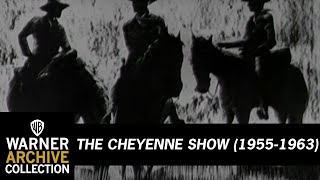 Cheyenne is an American western television series of 108 black-and-white episodes broadcast on ABC from 1955 to 1963. The show was the first hour-long western, and in fact the first hour-long dramatic series of any kind, with continuing characters, to last more than one season. It was also the first series to be made by a major Hollywood film studio which did not derive from its established film properties, and the first of a long chain of Warner Brothers original series produced by William T. Orr.