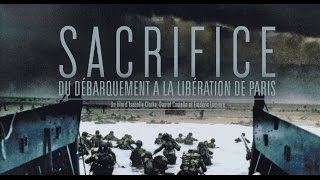 It was the biggest air and naval fleet in history to take off for France to free Europe from Nazi Germany’s clutches. As World War II entered its fifth year of combat, and despite set-backs in Russia, the power of Germany remained so strong that the Anglo American Allies had to recruit 2 million men all ready to sacrifice their lives. From the Battle of Normandy to the Liberation of Paris, tens of thousands of lives were lost; D-Day Sacrifice recounts the story of the D-Day Landings on 6 June 1944 through the testimonies of those who lived it. Comprised entirely of re-mastered and colourised archive footage, much of it never before seen, the remarkable testimonies of famous individuals like Dwight D. Eisenhower and Erwin Rommel are intertwined with those of anonymous soldiers and citizens, such as film director Samuel Fuller and Eisenhower’s chauffeur, Kay Summersby.

We try to add new providers constantly but we couldn't find an offer for "D-Day Sacrifice" online. Please come back again soon to check if there's something new.