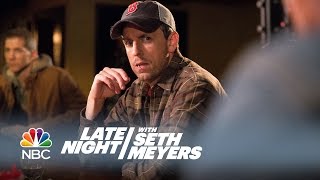 Seth Meyers, who is "Saturday Night Live’s" longest serving anchor on the show’s wildly popular "Weekend Update," takes over as host of NBC’s "Late Night" — home to A-list celebrity guests, memorable comedy and the best in musical talent. As the Emmy Award-winning head writer for "SNL," Meyers has established a reputation for sharp wit and perfectly timed comedy, and has gained fame for his spot-on jokes and satire. Meyers takes his departure from "SNL" to his new post at "Late Night," as Jimmy Fallon moves to "The Tonight Show".

Currently you are able to watch "Late Night with Seth Meyers" streaming on Hulu, NBC, fuboTV, Spectrum On Demand or for free with ads on Peacock, Peacock Premium.