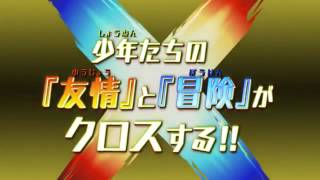 The story takes place in a fantasy world consisting of humans, Dragonoids and Monsters. There is a relative harmony between the three races. There are also Drops, spherical objects that come out of the planet, which can power up the Monsters. Humans and Dragonoids can take on the role of Dragon Callers if they have the capability to see the Drops, wherein, they form bonds with monsters. Currently, the planet is facing Drop Impacts, occurrences where a large amount of Drops are suddenly generated in a single area (and can also spread), which affects the lands and makes the Monsters berserk. In fact, one of the main duties of Dragon Callers is to settle the Drop Impacts by stabilizing the Drop distribution.

You are able to buy "Puzzle & Dragons X" on Apple iTunes, Amazon Video as download.