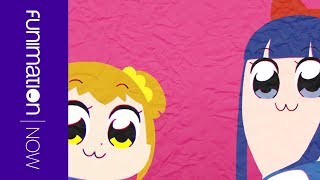 Crude, rude, and a little…cute? Get ready for the larger-than-life attitude of Popuko and Pipimi, the small and tall stars of Pop Team Epic! Based off the bizarre four-panel webcomic by Bukubu Okawa comes a comedy that’ll throw you off with its out-there jokes and intense absurdity. You think you’re ready for these girls? Think again, F#%**er!

6.8
Genres
Action & Adventure, Comedy, Animation
Runtime
23min
Age rating
TV-MA
Director
Jun Aoki , Aoi Umeki
TV
TV
Under the new EU law on data protection, we inform you that we save your history of pages you visited on JustWatch. With that data, we may show you trailers on external social media and video platforms.