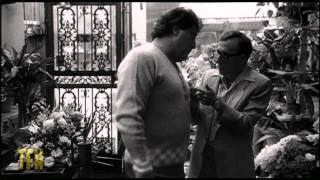 A hapless talent manager named Danny Rose, by helping a client, gets dragged into a love triangle involving the mob. His story is told in flashback, an anecdote shared amongst a group of comedians over lunch at New York's Carnegie Deli. Rose's one-man talent agency represents countless incompetent entertainers, including a one-legged tap dancer, and one slightly talented one: washed-up lounge singer Lou Canova (Nick Apollo Forte), whose career is on the rebound.

7.4 (24k)
Genres
Comedy
Runtime
1h 24min
Age rating
PG
Director
Woody Allen
Under the new EU law on data protection, we inform you that we save your history of pages you visited on JustWatch. With that data, we may show you trailers on external social media and video platforms.