Once Upon a Time… in Hollywood 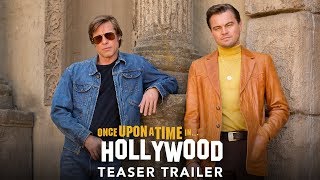 Los Angeles, 1969. TV star Rick Dalton, a struggling actor specializing in westerns, and stuntman Cliff Booth, his best friend, try to survive in a constantly changing movie industry. Dalton is the neighbor of the young and promising actress and model Sharon Tate, who has just married the prestigious Polish director Roman Polanski…

Once Upon a Time… in Hollywood streaming: where to watch online?

Currently you are able to watch "Once Upon a Time… in Hollywood" streaming on Starz, Starz Play Amazon Channel, DIRECTV or buy it as download on Apple iTunes, Google Play Movies, Vudu, Amazon Video, Microsoft Store, YouTube, Redbox, AMC on Demand, DIRECTV, Alamo on Demand.

People who liked Once Upon a Time… in Hollywood also liked