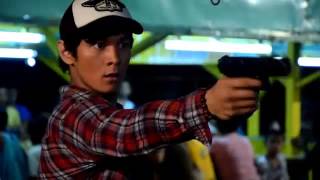 is about two siblings Alex Abueg (Falcon) and Abner Abueg (Marco), whose family and lives are shattered upon their initiation to the violent world of political assassins or saka saka. In this movie, it exposes the secret world of the saka saka as it explores and interrogates the age-old conflict between lawful righteousness and violent revenge. The movie is set against the contrasting backdrops of rustic, provincial life and the fast-paced, modern culture of the metropolis. By essence it is a story about family movie wherein it challenges audiences to think about the extreme extents that they may do to defend and protect their families from oppression and corruption.