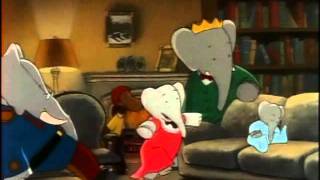 Babar is a Canadian/French/Japanese animated television series produced in Quebec, Canada by Nelvana Limited and The Clifford Ross Company. It premiered in 1989 on CBC and HBO, subsequently was rerun on HBO Family and Qubo. The series is based on Jean de Brunhoff's original Babar books, and was Nelvana's first international co-production. The series' 78 episodes have been broadcast in 30 languages in over 150 countries. Episodes of Babar currently air on Ion Television and Qubo. While the French author Laurent de Brunhoff pronounces the name Babar as "BUH-bar", the TV series in its first five seasons pronounces the name as "BAB-bar". In 2010, a computer-animated sequel series spin-off of Babar titled Babar and the Adventures of Badou was launched. The new series focuses on a majority of new characters.

Currently you are able to watch "Babar" streaming on Hoopla or for free with ads on Tubi TV. It is also possible to buy "Babar" as download on Apple iTunes, Google Play Movies, Vudu, Amazon Video.

6.5 (4k)
Genres
Animation, Comedy, Drama, Kids & Family, Fantasy
Runtime
24min
Age rating
TV-G
TV
Under the new EU law on data protection, we inform you that we save your history of pages you visited on JustWatch. With that data, we may show you trailers on external social media and video platforms.