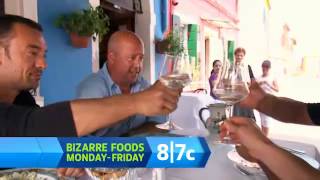 Bizarre Foods with Andrew Zimmern is a travel and cuisine television show hosted by Andrew Zimmern on the Travel Channel. The first season debuted on Monday, February 26, 2007 at 9pm ET/PT. Bizarre Foods focuses on regional cuisine from around the world which is typically perceived by Americans as being disgusting, exotic, or bizarre. In each episode, Zimmern focuses on the cuisine of a particular country or region. He typically shows how the food is procured, where it is served, and, usually without hesitation, eats it. Originally a one-hour documentary titled Bizarre Foods of Asia, repeated showings on the Travel Channel drew consistent, considerable audiences. In late 2006, it was decided to turn the documentary into a weekly, one-hour show with the same premise and with Andrew Zimmern as the host. In 2009, Zimmern took a break from Bizarre Foods to work on one season of the spin-off Bizarre World.