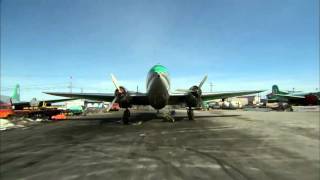 Ice Pilots NWT is a reality television series broadcast on History Canada that portrays Buffalo Airways, an airline based in Yellowknife, Northwest Territories, Canada. Buffalo mainly flies WWII-era propeller planes year-round in the Canadian North. It premiered on November 18, 2009. The show was renewed for a second season with filming completed on August 2, 2010. The season premiere was aired on History Television January 12, 2011. Season 3 was greenlit on August 18, 2010 and began airing on October 12, 2011. In the UK, series 2 was shown on Quest commencing May 2011. The episodes in season 4 have been shown on the Discovery Channel in the UK. Season 1 of Ice Pilots began airing on the National Geographic Channel in the US on April 22, 2011. Both Season 1 and 2 have aired in Australia on National Geographic Channel and National Geographic Channel HD and currently air on the digital channel 7 Mate. On February 2, 2012 The Weather Channel announced that it was adding Ice Pilots to its primetime lineup. On March 5, 2012 the show started airing on The Weather Channel, starting with seasons 1 and 2. The National Geographic Channel no longer airs the show regularly, though it does occasionally broadcast episodes.

Currently you are able to watch "Ice Pilots NWT" streaming on DIRECTV, IMDB TV Amazon Channel or for free with ads on Tubi TV, The Roku Channel, Pluto TV. It is also possible to buy "Ice Pilots NWT" as download on Apple iTunes.