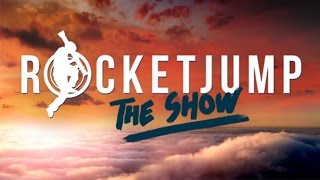 A behind-the-scenes look at the RocketJump production team (Video Game High School) as they create phenomenal action-comedy short films. Each half-hour episode of the series will chronicle the filmmaking behind RocketJump’s newest short and will include an exclusive look at the short film itself.

Currently you are able to watch "RocketJump: The Show" streaming on Hulu or buy it as download on Apple iTunes, Google Play Movies, Vudu, Amazon Video.