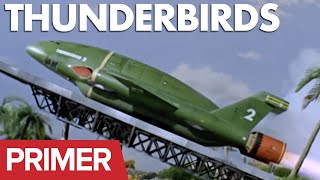 Thunderbirds is a 1960s British science-fiction television series which was produced using a mixed method of marionette puppetry and scale-model special effects termed "Supermarionation". The series is set in the 21st century and follows the exploits of International Rescue, a secret organization formed to save people in mortal danger with the help of technologically advanced land, sea, air and space vehicles and equipment, launched from a hidden base on Tracy Island in the South Pacific Ocean.

Currently you are able to watch "Thunderbirds" streaming on fuboTV, Crackle or for free with ads on Freevee Amazon Channel, The Roku Channel, Redbox, Pluto TV. It is also possible to buy "Thunderbirds" as download on Amazon Video.