Between Heaven and Hell 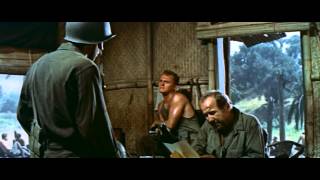 Sam Gifford remembers : In prewar years he was an arrogant southern cotton plantation owner, married to the daughter of a colonel. At the beginning of the war he was mobilized with his National Guard unit as a sergeant. Came the day when, revolted by the cowardice of his lieutenant, who had fired at his own men, he hit him. Downgraded, he was sent to a disciplinary battalion. Sam now discovers his new detachment, his new commanding officer, just another cowardly brute, Captain Waco Grimes. While in combat, Sam will gradually become closer to the privates, working-class people he used to despise. He will become another man, a better man.

Between Heaven and Hell streaming: where to watch online?

People who liked Between Heaven and Hell also liked