A closer look at Marilyn Monroe’s meteoric rise to fame and her sudden death that would shock the world.

Blonde is a biographical drama written and directed by Andrew Dominik and produced by Plan B Entertainment. The movie is based on a best-selling novel of the same name by famed American writer Joyce Carol Oates.

Norma Jean Baker, better known to the world as Marilyn Monroe, was an actress and central figure in the Golden Age of Hollywood. Her life and legacy has been the subject matter of many books and movies as she was considered to be one of the greatest female icon of the 20th century.

The movie explores Monroe’s life as “an orphan lost in the woods of Hollywood” according to director Andrew Dominik. The Australian filmmaker is best known for his work on The Assassination of Jesse James by the Coward Robert Ford and Killing Them Softly, two movies starring Brad Pitt. The pair’s professional relationship continues on this movie as Plan B Entertainment – a production company owned by Pitt – is responsible for the project.

Starring as Marilyn Monroe is Ana de Armas. Other members of the cast include Adrien Brody as Arthur Miller, Bobby Cannavale as Joe DiMaggio, and Sarah Paxton as Miss Flynn.

Where can I stream Blonde?

Blonde will be available to stream on Netflix sometime in 2022. Check back with JustWatch to find out when the film will be released. 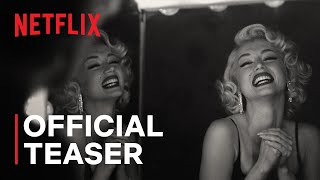 Blonde streaming: where to watch online?

Blonde will be available to stream on Netflix from September 23, 2022.