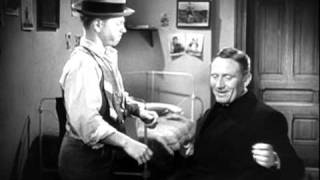 The devout but iron-willed Father Flanagan leads a community called Boys Town, a different sort of juvenile detention facility where, instead of being treated as underage criminals, the boys are shepherded into making themselves better people. But hard-nosed petty thief and pool shark Whitey Marsh, the impulsive and violent younger brother of an imprisoned murderer, might be too much for the good father's tough-love system.