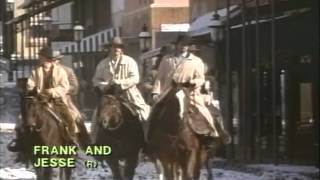 At the end of the Civil War, Frank and Jesse James and other former guerillas who rode with Quantrill and Bill Anderson take the oath of allegiance to the Union. Feeling oppressed by Chicago railroad investors, the James and Younger brothers, Bob and Charlie Ford, Clell Miller and Arch Clements take to robbing banks, trains and coaches, with Pinkerton sworn to bringing them to justice.