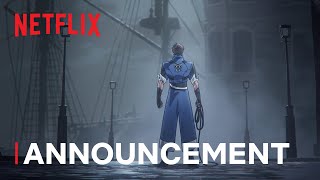 Castlevania: Nocturne is not available for streaming.

Richter Belmont is a fearless hunter on a mission to save his love, Annette, from the clutches of Dracula. The infamous vampire has been resurrected once more, much to the dismay of the Belmont clan of vampire hunters who have worked tirelessly to rid the world of Dracula. Will Richter finally be able to fulfill his destiny and save the one he loves?

Castlevania: Nocturne is an upcoming animated fantasy series produced by Netflix. The series is a spinoff of a Japanese video game, originally called Akumajo Dracula. The game was first released in 1986 and was produced by Konami. Castlevania is one of the most successful games in history, and has expanded to include several spinoff games, books, and other TV series.

Castlevania: Nocturne draws its inspiration from the plot of Castlevania: Rondo of Blood, a game where Richter Belmont is the primary character. The Belmonts are a vampire hunting family and the games’ protagonists. The family has the difficult task of defeating Dracula, and in Castlevania: Nocturne, Richter is the one heading the mission. The series is set in 1792 during the French Revolution.

Where can I stream Castlevania: Nocturne?

Castlevania: Nocturne will be available to stream on Netflix sometime in 2023. Check back with JustWatch to find out when it will be released.

We try to add new providers constantly but we couldn't find an offer for "Castlevania: Nocturne" online. Please come back again soon to check if there's something new.