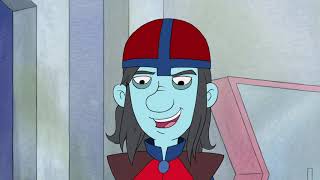 Horrid Henry is a British animated television series based on the book series by Francesca Simon produced by One Explosion Studios and Nelvana Limited, broadcast from late 2006 on Children's ITV in the UK and it will air on Cartoon Network Pakistan and Cartoon Network India on 2013 from 6am until 6:30am. The animation style differs from the Tony Ross illustrations in the books. Series Producer of the series is Lucinda Whiteley, Animation Director is Dave Unwin. The series has been sold to more than a dozen countries including France, Germany, South Africa, South Korea, and the Philippines. So far, the two series have 104 episodes. The second series of 52 episodes started airing on 16 February 2009 and episodes from this series are currently being shown alongside episodes from the first series. There is a music album Horrid Henry's Most Horrid Album. The incidental music is composed by Lester Barnes and additional songs are composed by Lockdown Media.

Currently you are able to watch "Horrid Henry" streaming on Amazon Prime Video, Netflix or buy it as download on Apple iTunes, Amazon Video.