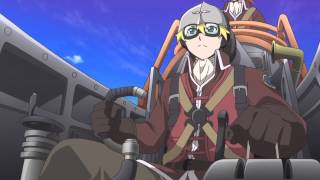 In order to uncover the "end of the sky," as spoken of in ancient mythology, Kal-el Albus is sent to Isla, an island in the sky. There he attends Cadoques High's Aerial Division, where he enjoys a carefree life with his schoolmates. That is...until a surprise attack by the air tribe drags Isla into a bloody war.

Currently you are able to watch "The Pilot's Love Song" streaming on Funimation Now or for free with ads on Crunchyroll.