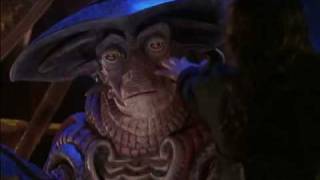 As season one begins, Astronaut and astrophysicist John Crichton becomes stranded on the other side of the universe when his Farscape module goes through a wormhole. He is taken in by the misfit alien passengers of the sentient ship Moya, a spacecraft that happens to be on the run from the militaristic “Peacekeepers.” Unfortunately, while the ship is docked and making repairs, Crichton tangles with a captive Peacekeeper named Aeryn --a beautiful and volatile woman who alerts her captain about the Moya, putting everyone on board in danger.

Currently you are able to watch "Farscape - Season 1" streaming on Amazon Prime Video.