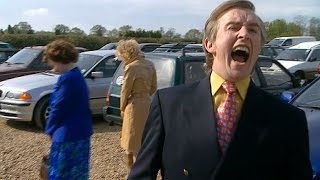 I'm Alan Partridge is a BBC situation comedy starring Steve Coogan, of which two series of six episodes each were produced — the first in 1997 and the second in 2002. The series followed the titular Alan Partridge, a failed television presenter whose previous exploits had featured in the chat-show parody Knowing Me, Knowing You with Alan Partridge, and who is now presenting a programme on local radio in Norwich. Both series were written by Peter Baynham, Coogan and Armando Iannucci; supporting Coogan were Felicity Montagu as his faithful, mouse-like personal assistant, Lynn Benfield; Simon Greenall as Geordie Travel Tavern handyman/BP garage attendant Michael; and Phil Cornwell as disc jockey Dave Clifton. It has been well received by both critics and fans, and was nominated for three BAFTAs, two British Comedy Award, and a Royal Television Society award.