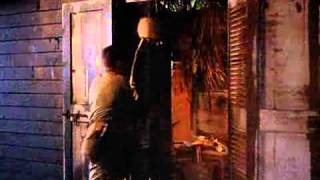 On a Japanese-occupied island during World War II, only two soldiers remain alive after a mission attempt goes horribly wrong. Trapped on the island, they must escort a scientist and his daughter to the other side of the island where their ship awaits. They must battle nature, hard terrain, and advancing Japanese troops.

Beachhead streaming: where to watch online?

Currently you are able to watch "Beachhead" streaming on Amazon Prime Video, Epix, DIRECTV. It is also possible to buy "Beachhead" on Vudu as download or rent it on Vudu online.

5.8
Genres
War & Military, Drama
Runtime
1h 30min
Age rating
PG
Director
Stuart Heisler
Under the new EU law on data protection, we inform you that we save your history of pages you visited on JustWatch. With that data, we may show you trailers on external social media and video platforms.