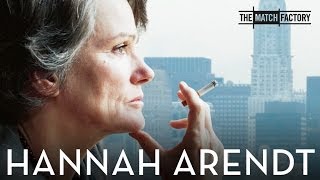 HANNAH ARENDT is a portrait of the genius that shook the world with her discovery of “the banality of evil.” After she attends the Nazi Adolf Eichmann’s trial in Jerusalem, Arendt dares to write about the Holocaust in terms no one has ever heard before. Her work instantly provokes a furious scandal, and Arendt stands strong as she is attacked by friends and foes alike. But as the German-Jewish émigré also struggles to suppress her own painful associations with the past, the film exposes her beguiling blend of arrogance and vulnerability — revealing a soul defined and derailed by exile.

7.1 (10k)
Genres
Drama, Made in Europe
Runtime
1h 53min
Director
Margarethe von Trotta
Under the new EU law on data protection, we inform you that we save your history of pages you visited on JustWatch. With that data, we may show you trailers on external social media and video platforms.