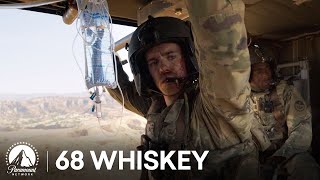 A dark comedy following a multicultural mix of men and women deployed as Army medics to a forward operating base in Afghanistan nicknamed “The Orphanage.” Together, they endure a dangerous and Kafkaesque world that leads to self-destructive appetites, outrageous behavior, intense camaraderie and occasionally, a profound sense of purpose.

Currently you are able to watch "68 Whiskey" streaming on Paramount Network, Paramount Plus, Paramount+ Amazon Channel or buy it as download on Apple iTunes, Google Play Movies, Vudu, Amazon Video.