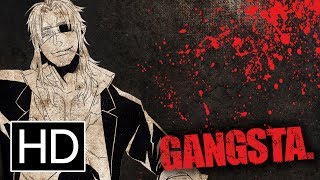 In the crime-ridden, mafia-governed city of Ergastulum, Worick and Nicolas are two “handymen” known as “Benriya” who would take any dirty job from either police or mafia — for a good price. After an assignment from police the two met and later joined by Alex, a former prostitute who got interested in the mysterious background of the team, in particular of Nicolas’ abilities.

Currently you are able to watch "Gangsta." streaming on Hulu, Funimation Now or for free with ads on Tubi TV. It is also possible to buy "Gangsta." as download on Apple iTunes, Amazon Video, Google Play Movies.